Click on the book cover for ebook buy links 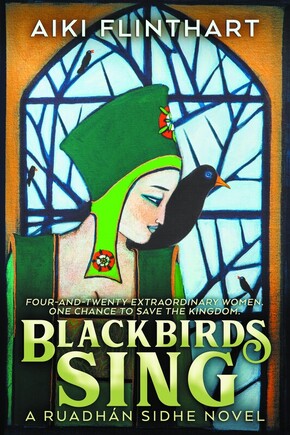 Four-and-twenty extraordinary women; one chance to save a kingdom.

What would you sacrifice to save your family, your loved ones, yourself?

In September 1486, the reign of King Henry VII of England is again threatened by York loyalists. The only thing standing in the way is a four-hundred-year-old sidhe who just wants to be left alone, and a group of London women with a lot to lose if England is plunged back into war.
​But, in 1486, women have no power. Only the ability to make difficult choices and sometimes-heartbreaking sacrifices.
Become immersed in the fascinating, perilous lives of these women, as told through the medium of 25 interwoven short stories. A prostitute selling her daughter’s virginity to pay her debts; a nun returning to the world after 30 years; laundress whose son is murdered; a lady’s maid hiding her Jewish culture; a blind musician running from a forced marriage; and more.
Each story is a piece in the puzzle. Each woman faces her own trials as she plays her small part in the desperate attempt to protect King Henry and his wife, Elizabeth of York.
Because if they fail, England will once again be thrust into civil war between the Yorks and Lancasters. And these four-and-twenty women have already sacrificed too much.

This book is historical fantasy, but the fantasy element is slight. It ties into the same universe as the Shadows trilogy, but 500 years eariler. It has been a sheer delight to write and to find the unique voices of these 24 women. I'm looking forward to writing more about the Blackbirds and their continuing adventures down through the ages. Watch this space!

"A masterfully woven tale that is an absolute delight to read. I adored that each chapter told the story of a different woman, so by the end I felt I knew every woman of import in London 1486AD. Every character is crafted to perfection, clearly portraying their life and class within the larger novel, that was gritty, vivid and fascinating to read. Perfect for anyone who loves a good historical yarn. I would highly recommend grabbing this one in hard book form, as the beautiful artwork will make it a treasured addition to any bookshelf. Bravo, Aiki, a clever saga that is quite the masterpiece."
Traci Harding - Author of The Ancient Future Series

"Fascinating portrait of the lives of a brilliant cast of Tudor women – treason, intrigue, plots-within-plots, loyalty, courage and Sidhe magic… what more could you ask of a historical fantasy? Ambitious, intricate and entertaining. Highly recommended for lovers of both historical fiction and fantasy alike."
Pamela Freeman - Award-winning Author of the Castings Trilogy
Buy Ebook