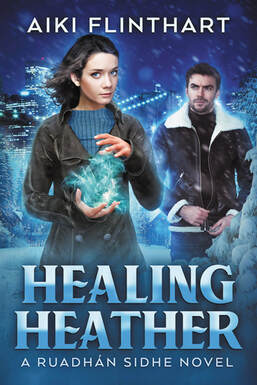 Book 4 of the Ruadhan Sidhe novels
​
Young midwife, Heather, has reached breaking point. Too many years of giving everything to save babies and women who can’t afford USA health care. Too little love left, when all men do is take strength from her. Too much hiding and running.
But when she discovers O’Conner Inc private investigator, Kade Miller, is tracking her, the only choice is to face him. A disastrous decision. Unprepared for her attraction to Kade, she cannot hide all her secrets.
​
Secrets which could be devastating for both of them if she can’t keep him at arm’s length.

Kade Miller is forced to take on a PI job he’d rather avoid: hunting down another baby-killing illegal midwife. But when Kade finally catches the woman, he is drawn not only to her, but also into a world of intrigue and danger. For she has strange abilities that influence him in disturbing ways. Reminding him of losses he’s tried to forget.
She’s also beautiful, frightened, and hiding something important.
The only thing Kade knows for sure is that he needs to get Heather back to New York and uncover her truths.
Can he do that and still protect his own heart?

Cover quote
“I love the Ruadhan Sidhe series – and Healing Heather – so much I don’t want it to end. Ever.” Amanda West

(Author's note: Not a vampire, shapeshifter or zombie story, in case you were wondering.  Rowan and Logan make a cameo appearance in their continuing quest to find Finn, Logan's father.
​
Buy Ebook