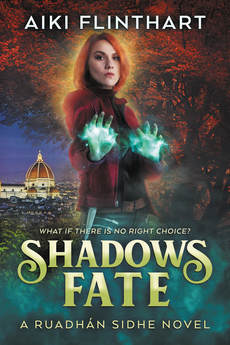 Book 3 of the Ruadhan Sidhe novels
​
What if there is no right choice?

Rowan Gilmore and her sidhe companions are in a desperate race to stop the truth of the sidhe’s powers being revealed to the world. For, once humans are aware of the sidhe, fear and greed will do what the Mors Ferrum has been unable to achieve ­– wholesale slaughter of the Ruadhán Sidhe.
The chase takes Rowan to Italy, where Maeve enlists the help of her son, Dante, to intercept the parcel of vital information sent to the Mors. But they’re too late. The package containing everything the world doesn’t know about sidhe ends up in the hands of Alexander Dyson – the leader of the Mors Ferrum.
Now Rowan must decide who to trust – and how deeply – in order to save her people. Every one of her companions has an agenda. Every one of them wants to use her for their own cause. As does Dyson. But who is telling the truth and who is lying?
In this epic clash between the Ruadhán sidhe, the Dark sidhe, and the Mors Ferrum, whoever controls Rowan’s powers will determine the future of mankind and sidhe alike.
​
But what if she’s been on the wrong side of this battle, right from the start?

(Author's note: Not a vampire, shapeshifter or zombie story, in case you were wondering
​
Buy Ebook